Judo is a competitive sport originating from the Japanese martial art Jujitsu. The objective is to either throw or take an opponent to the ground, then immobilize or otherwise subdue with a pin, or force an opponent to submit with a joint lock or a choke. Judo became an Olympic sport in 1964. It is a physically demanding and highly regarded sport and many top MMA fighters have a background in Judo at an Olympic level.

We only have one Judo class on our schedule at the moment and it's aimed at our Brazilian Jiu Jitsu students. It is followed by an Open Mat where high level Judokas come to train, and students from the class are able to practice what they have learned in class in a more live situation. In our Brazilian Jiu Jitsu classes we will also sometimes cover some basic Judo. 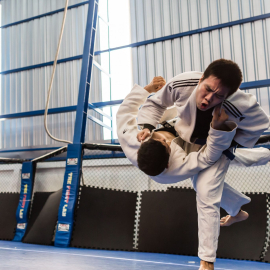